NextEverything about SAT 2020 – Update and Strategies
English Language Arts
| May 25, 2020

How to Use a Plot Diagram for Effective Storytelling

Plot Diagrams are essential tools for building literary comprehension and effective storytelling, thus, forming one of the most essentials skills in English Language Arts. Plot diagrams allow students to form a course of the narrative and trace the major characters in a story while honing their analytical skills.

A plot diagram is a tool that is commonly used to organize a story into certain sections. We can use them to map out our own stories. At the same time, we can also use plot diagrams to analyze the stories of others!

Learning how to use a plot diagram is a skill many students are required to learn in their English classes, for good reason, too! It is a great way to understand the elements of a short story or novel. It may also help you understand why the author chose to write certain parts of the story as well.

Definition: The plot is a sequence of events in a story that forces a character to make increasingly difficult decisions, driving the story toward a climactic event and resolution.

Okay, so what does this mean? The plot has a particular structure that allows authors to buckle in their readers for a roller-coaster ride. That’s not just a silly metaphor. Like a roller-coaster ride, the plot of any literary work will slowly increase the anticipation, excitement, and expectations of the reader before reaching the highest point. After this high point, the plot quickly drops off giving the reader exhilaration and satisfaction before slowing to a stop.

In more specific terms, the plot is about cause and effect. Every fact in the story must drive the plot. Whether it is to invite the reader to ask questions or to illuminate character growth, the elements of the plot will each have a specific purpose.

E.M Forester makes the distinction between a story and a plot in his book, Aspects of a Novel. A story is a bare-bone recitation of facts. For example, Danny left his fiancee at the altar.

A plot, on the other hand, would show cause and effect. Danny’s old flame objected at the wedding, so Danny left his fiancee at the altar. (Almost a romance, isn’t it?)

We’ll let Forester explain it in his own words.

Let us define plot. We have defined a story as a narrative of events arranged in their time-sequence. A plot is also a narrative of events, the emphasis falling on causality. ‘The king died and then the queen died,’ is a story. ‘The king died, and then the queen died of grief,’ is a plot. The time-sequence is preserved, but the sense of causality overshadows it. Or again: ‘The queen died, no one knew why, until it was discovered that it was through grief at the death of the king.’ This is a plot with a mystery in it…

The gist of this is the difference between these two sentences:

The basic structure of a plot diagram 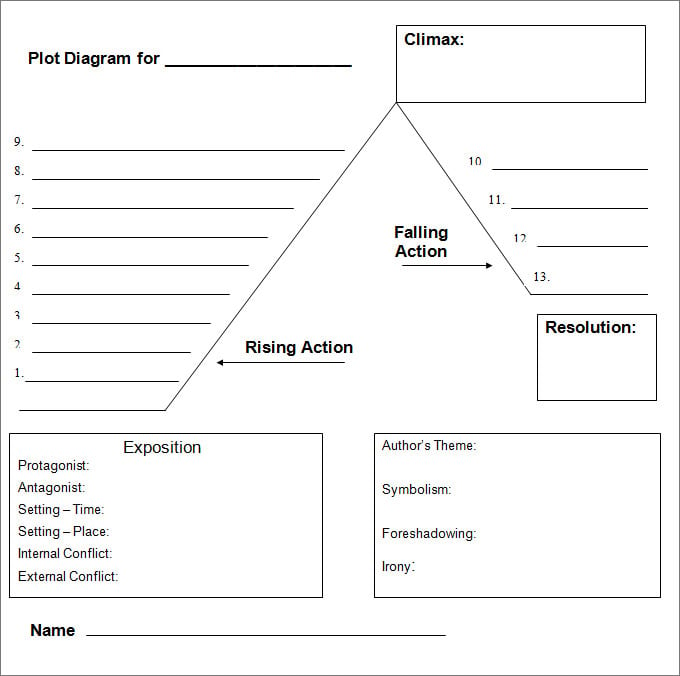 The most general plot diagram template. You’ve definitely seen this before.

To build a plot with the required causal characteristics, we must first break down the components of the plot. When we build these components back up in the right order, the reader will then see the complete picture incrementally, adding to the anticipation needed to keep reading.

A typical plot diagram should contain the following elements

All of the world-building will likely not take place in the exposition itself but the author will share enough information to show the reader what’s normal for the protagonist. That way, later when something is wrong, the reader will know. In our roller-coaster metaphor, the reader would be buckling in their seatbelt. They’re in for one hell of a ride.

2. Rising action, which reveals the conflict

This is where the author raises the stakes and begins building up to the story’s climax. The protagonist is likely to be going through many harrowing events during the rising action. It may seem like the antagonist is consistently winning. The author will use the rising action to establish what exactly is at stake and to ensure the readers understand the main conflict.  We are now climbing up the incline of the roller-coaster, will the drop-off be worth it?

3. The climax, or turning point

The problem is now the worse the protagonist has ever seen. All of the complications up until this point has been building for this critical moment. Here is the point where tension is the highest in the story with all of the main conflict coming down to the protagonist’s crucial choice. Usually, the climax will not only illuminate the major conflict but also tie all the minor conflicts in to create a moment of intense anticipation. We’re at the highest point of the roller-coaster.

Now it’s time to relax. The events in the falling action usually deal with the consequences of the choices made during the climax. Your teacher may use the term denouement, which is a French term meaning “tying up loose ends”. Many of the remaining questions and moments in the plot will be solved and connected during the falling action. Can you feel the exhilaration of the descent?

Here, the author establishes the ‘new normal’. Through the events of the plot, the readers will have seen the characters change and adapt while also having epiphanies that drive their development. Now, the culmination of those experiences results in the resolution, allowing the reader to reflect and realize how the characters and the world around them have changed as a result of the plot. We are now slowing to a stop.

Example of a Plot Diagram

We’ll leave you with a quick and easy-to-understand utilization of the plot diagram for the short story, The Tortoise and the Hare.

Exposition: The hare boasts to all the other animals that he is the fastest of them all. The tortoise disagrees with the hare and challenges him to a race.

Rising Action: The other animals set a course for the race the next day. The race begins and the hare takes off while the tortoise plods much slowly behind the hare. Halfway through the race, the hare realizes that he has more than enough time to beat the turtle so he decides to take a nap.

Falling Action: But the hare’s last leap is too late. The tortoise had beaten him to the finish line.

Resolution: The tortoise tells the hare that slow and steady wins the race!

Try to apply the plot diagram to one of your favorite books, movies, or short stories. You might find that many elements of the plot no longer come as a surprise to you.

We hope you stay positive during these trying times. At Talentnook, we are working towards ensuring that the learning does not stop. You can also take a break from this stressful period by learning something new and creative like playing an instrument, painting, creative writing, and more! Check out some free trial lessons with Talentnook.

Looking for an all-in-one writing program for students who want to build an effective writing skillset – early on. So they can communicate with confidence!